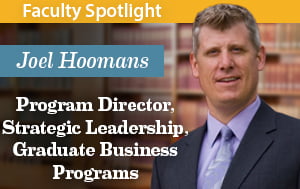 Innovator in Leadership and Development of People

During his 10 years in Human Resources for Wegmans Food Markets, Joel Hoomans became the company’s first Manager of Leadership Development. His success came from approaching the company’s employees as renewable assets to be invested in and treated with respect, rather than thought of as expendable resources. Yet, in his role as hiring manager, he quickly noticed than many of the top-tier MBA graduates he interviewed did not possess critical customer service and leadership abilities. These highly skilled candidates lacked the dedication to the growth and development of people that were fundamental to the success of the organization. This motivated Joel to enter higher education on a mission to create the next generation business degree focused on developing emerging leaders and enhancing the abilities of established leaders.